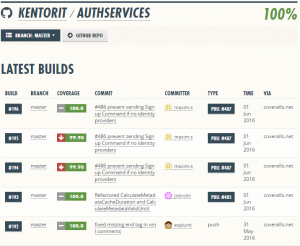 With Coveralls.IO it’s possible to get code coverage on all pull requests submitted. For Kentor.AuthServices I’ve set up AppVeyor builds that uses Coveralls.Net to upload coverage numbers to Coveralls.IO.

When I set up the code coverage I already had AppVeyor builds running. I wanted something that worked together with AppVeyor. I tried out a few options and quickly found out that I also wanted something that used the Visual Studio Code Coverage engine. The project had 100.00% coverage in Visual Studio when I started and when I tried another coverage engine it showed some lines as skipped. I wanted consistency with the Visual Studio Code Coverage, which coveralls could give me.

My recently finished project produced the best code quality in my career so far. The key success factors were a clear architecture, insane compiler warning levels and last but not least code reviews.

The project was a greenfield project so there was no legacy code to inherit which gave us the opportunity to create something great, but of course also the opportunity to screw up completely. In fact, I was involved in a similar project some years ago that had the same opportunities but came out with all but great code quality.

In this post my recently finished project has the codename Alpha,
while the other project with not-so-good code quality has codename Beta.