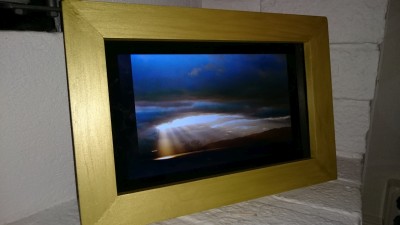 We share pictures of nearly every moment of our lives (and our kids’ lives) through social media. That’s great for distant relatives that can handle a smart phone, but what about those that can’t? I recently setup a cheap Android tablet as a remote controlled digital photo frame.

I wanted a setup where the user wouldn’t have to do anything at all. The photo frame should start automatically in the morning, show photos during the day and shut down in the evening. No user interaction should be required at all. I also had to make everything remote controlled as it would be located about 500km away, without anyone nearby that could handle any tech support. Last, but not least, it’s important that it’s as easy to share to the photo frame as to any other social media from a mobile phone. 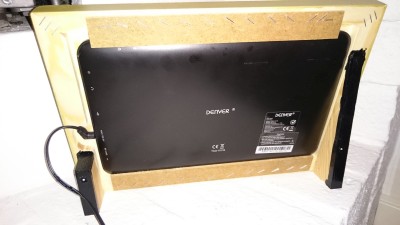 I bought a cheap, plastic 10″ Android tablet with limited battery time for €100. That’s actually cheaper than most specialised photo frames, but this one comes with a full Android OS and Wifi support. To get a proper photo frame feeling I did a bit of carpentry work with a router (no, not the kind handling packages on the Internet, a router is a woodworking tool).

To show the slides I used the DayFrame Android App. Checking out the page you might notice that it has a parental guide warning. That’s definitely proper, because the default playlist includes some NSFW art. To be able to drop the default playlist (and avoid showing NSFW pictures to granny), the premium version is required. It’s totally worth it.

The photo frame is Internet connected through an existing Wifi network. To handle the uploads I use Dropbox. I set up a separate account for the photo frame and invited those that should be able to share to the frame to a shared folder. Dropbox has excellent apps for Android and Ios so sharing is as simple as any other social media on the mobile. It’s also easy to crop and resize images on a computer.

Finally I had to fiddle around a bit with the settings to get everything working without user interaction. It turned out that starting an Android device that has gone to sleep is non-trivial. The settings I used that worked are listed below: